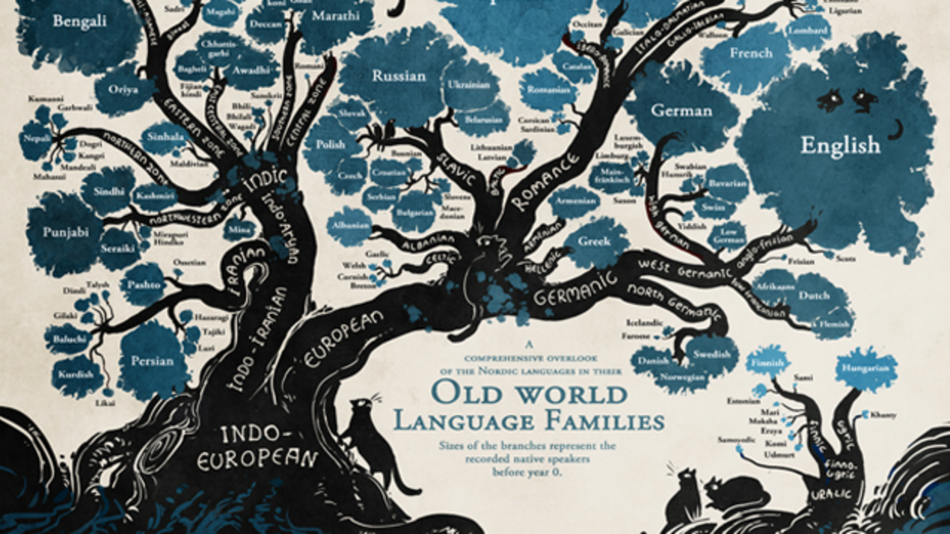 Both Albania and Kosovo maintain Gjergj Kastrioti Skenderbeg as their national hero, and he is also known as a hero in the Balkans and Western Europe. In many households it is common to find a bust of this hero. On 28 November 2012 (Albanian Independence Day), a bust of Skenderbeg was unveiled in central London to commemorate 100 years of Albanian Independence. 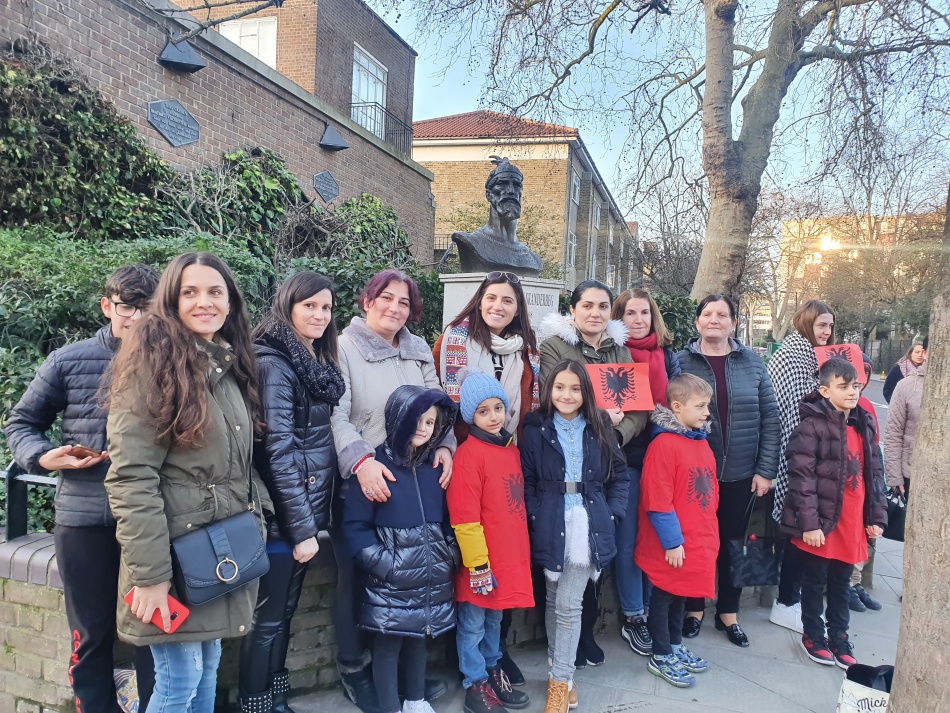 A visit to Skenderbeu's statue in London.

Skenderbeg is remembered in history as the warrior taken from his family by the Ottomans as a child, but who never forgot his homeland and mother tongue. He returned to Albania as an adult to liberate his people from Ottoman occupation. Many historians agree that his heroics is what kept the Ottoman Empire from entering Western Europe for over half a century. His bust in central London is inscribed with the Words “Defender of Western Civilisation”.

He was born as Gjergj Kastriot of the Kastrioti family of Dibra in 1405. The youngest in his family, he was taken by the Ottoman Empire to be raised in the royal court as a hostage to ensure the cooperation of his father, Gjon Kastrioti, who was a powerful feudal lord that openly opposed Ottoman rule over Albania. Gjergj Kastriot was trained as an Ottoman solider and earned himself the rank of Bey, the Ottoman word for a military commander and was renamed Iskender as a homage to his kinship with Alexander the Great. His Ottoman name was Iskender Bey and he was later known as Skenderbeu in Albanian (the English of this name is Skenderbeg). Over 300 young Albanian boys had been taken hostage and raised by the Ottomans with their names stripped and their religion converted to Islam. Skenderbeg was placed in command of the Albanian troops in the Ottoman Army and sent to fight the Hungarians led by Hynadi (the White Knight). However, Skenderbeg, did not see the Hungarians as the enemy but rather the Ottomans themselves who had taken them from their homes. He entered into an agreement with the White Knight that they would be allies against the Ottomans. In 1443, the Ottomans and the Hungarians met off the battlefield, however Skenderbeg ordered his men to retreat. The rest of the Ottoman army knew of Skenderbeg and his strength and bravery, so when they saw him and his men begin to retreat, they panicked and fled. Skenderbeg marched his men to the Albanian fortress of Kruje which was under Ottoman occupation and slaughtered the Ottoman forces garrisoned there and raised his family crest, the double headed eagle. In one year, he gathered the nobility of Albania in Lezhe and gave his famous speech which unified Albania for the first time, and he was appointed commander-in-chief of the Albanian army. 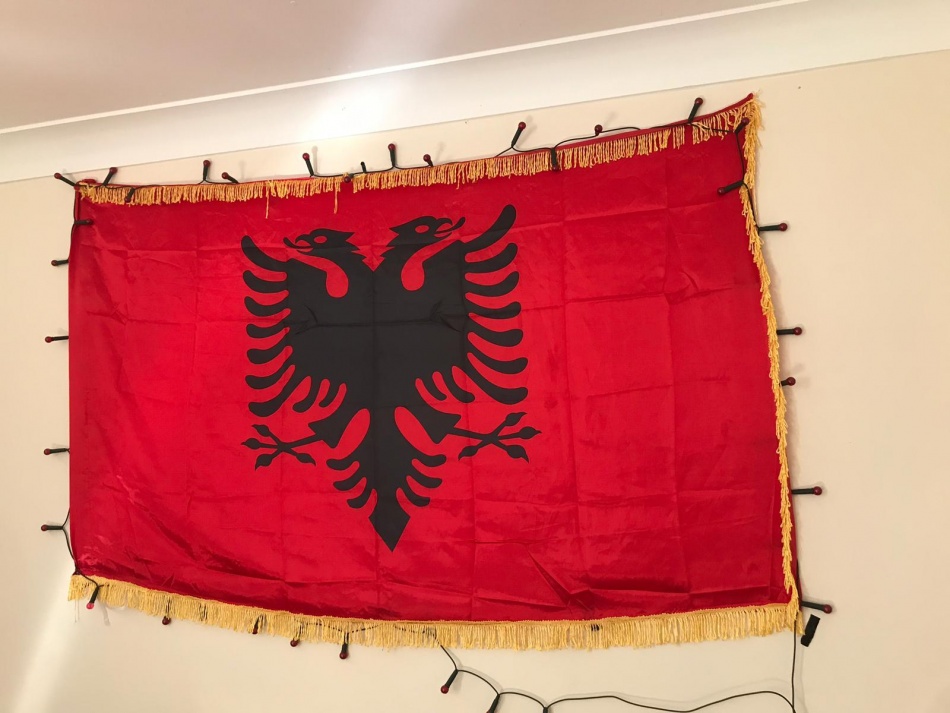 Skenderbeg had infuriated the Ottoman Sultan by his betrayal and continued to cause great difficulties by defeating army after army sent by the Ottoman. Even though outnumbered, Skenderbeg was able to defeat the Ottomans by using guerrilla tactics and their knowledge of the territory.

Skenderbeg formed a strong alliance with the Vatican and the Kingdom of Naples. The Vatican grew consious of the threat posed by the Ottoman Empire and gathered a Holy Army to fight. The Pope crowned Skenderbeg as the King of Albanian and bestowed many titles upon him including Commander of the Holy Christian forces to lead the crusade against the Muslim Ottomans. However, the Pope died in 1464 and his successor was no longer interested in fighting the Ottomans, leaving Skenderbeg on his own. Nevertheless, Skenderbeg faced the Ottomans in 1467 and was victorious once again.

Skenderbeg died of malaria in 1468, and there was no one left to fight the Ottomans. His family fled to the Kingdom of Naples and Albania fell to the Ottomans for the next 500 years. During this time, Western Europe blossomed into the renaissance whilst Albania fell in to the dark ages, cut off from advances in technology, science, and the arts while the Ottomans renewed their efforts to destroy the Albanian culture. Despite this, the Albanian people kept their identity, culture and language, just as Skenderbeg had when taken hostage. It is said by many historians that, had it not been for Skenderbeg, all of Western Europe may have suffered the same fate as the Albanians.

The Legend of Skenderbeg has been told throughout history. For example Antonio Vivaldi wrote the opera Scanderbeg in honour of him, whilst Byron wrote about Skanderbeg and his warrior nation in the following terms in Childe Harold’s Pilgrimage (1812-1818):

“Land of Albania! where Iskander rose,

Theme of the young, and beacon of the wise,

And he his namesake, whose oft-baffled foes,

Shrunk from his deeds of chivalrous emprize:

Land of Albania! let me bend mine eyes

On thee, thou rugged nurse of savage men!

The cross descends, thy minarets arise,

And the pale crescent sparkles in the glen,

Through many a cypress grove within each city’s ken”

An exploration of the Albanian language, amongst one of the oldest in Europe, which is cherished amongst the Albanian community in Newham.