Alex Oma-Pius was born in Nigeria and formed IROKO in London in 1996, in order to increase the understanding and appreciation of African culture and arts. IROKO uses African art forms to enhance learning, skills, education, as well as improve peoples health and wellbeing. IROKO have been based in Stratford for over 20 years since 1997 and continues to work with the community. One of the key things about IROKO is:

“inclusiveness, because, if you look at most African events they are communal activities…and it is that ethos that I have brought into the activities of IROKO…The whole aim is to break down barriers, those barriers which prevent us from coming together.”

Heritage is a also key part of IROKO’s development.  Alex talks about how people look at objects in the museum purely from the aesthetic and how it dawned on him that “some of the hidden stories of these objects are not explained and are not known.” One of these objects which we will talk about here is the talking drum, that Alex donated to Newham Archives in order to preserve its heritage and tell its story. The talking drum is from Yoruba, a nation in Nigeria and is a pre-colonial non-verbal communication instrument. It is a specialised instrument and not many people can play it. Those that play the talking drum are sometimes called an ‘Ayan’. You have to to be inducted into the guild of talking drummers to become an Ayan. Nigerian names starting with Ayan signify that they come from a family of talking drummers and will have played since childhood.

Historically they used the talking drum as a means of communication; to praise the king, to send messages across villages, to incite or inspire the community to action and for ceremonial activities. The drummer could even speak to the dancer, praising them or inspiring them to perform more.

How the talking drum is made

“they have to carry out sacrifices, they have to find out whether, it is ok for them to cut down this tree? Now, you may call it superstitious belief…they have to appease a certain god, the god of drumming, to say they want to cut this tree, and is it ok for us to cut it down?..there’s a whole ritual, a whole process you have to go through.”

The tree is then hollowed and carved into its hourglass shape. Then you have the animal skin on both sides and even the string is made out of the skin. When the skin has dried, you can then tune it and there is a special way that you tie the string at the centre to get the right tension and pitch. There is also no waste and everything is carefully considered; the sheep from the ceremony, will also be used for the skin, and for meat.

The sounds of the talking drum

Watch IROKO’s film from their latest heritage project Speaking Without Voice, that introduces you to the talking drum and its amazing sounds.

Alex, who only discovered the talking drum in his adulthood, said “I’m glad I was able to discover the talking drum, discover my heritage really.” He then refers to the Ghanaian Symbol of a bird looking back – Sankofa, which translates as “Go back and get it” (san – to return; ko – to go; fa – to fetch/seek), which is about looking back at your heritage, reflecting on the past in order to build a successful future.

IROKO works a lot in the community and in schools. Alex talks about his experiences in school and how heritage plays such an important role in making people feel connected:

“By the time you start bringing out all these positive things about their heritage, all of a sudden a child is, blossomed. That child is now happy to tell you, my father or my mother is African. When we go into a school originally to start all these workshops…they don’t want to identify.  So, these little things, whether it is our creative arts, whether it’s our music, whether it’s our dance, if it is done in a way that resonates with the community, with the children in school, you are giving them a real life enhancing skill, confidence and self esteem.” The community coming together

IROKO have been working with the Newham community for over 20 years and love bringing everyone together and Alex says that ‘we need to celebrate one another more’. He says that people from the diverse borough often come together and learn from one another, whether that be Asian dancing, African drumming or Latin American Samba dancing and if you like what the person is doing, then you join in.

“It is that type of freedom, that type of communal spirit, lets come together…the art form actually helps us to celebrate these things. Oneness, because at the end of the day, it’s all about feelings. You know. You feel sad, I feel sad, yes? Mental issues, you have mental issues, I have mental issues. You’re bereaved, I’m bereaved. You are happy, I’m happy. It’s human race, there’s real humanity, it’s not about whether you are black or white, African, Chinese, or Indian, all those are divisions. You know, it’s not your religion. If you look at what holds up, it’s about feelings, the human feelings, that’s what holds us together.”

When asked about his home in Newham Alex laughed and said:

“I can write Newham into my own heritage. My wife says we need to move, I say I’m not moving, I’m happy where I am.” 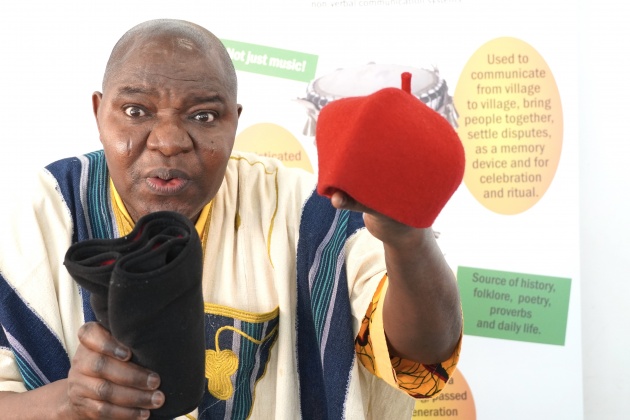 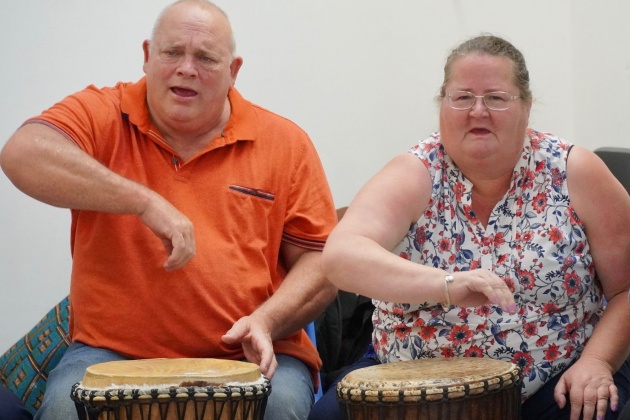 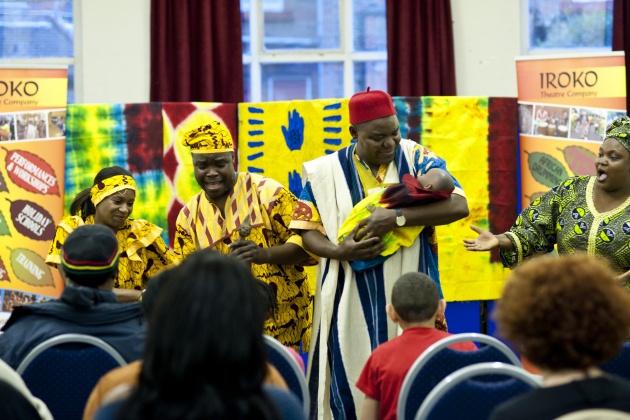 You can listen to the full 20 minute interview with Alex Oma-Pius, on making a home in Newham, IROKO and the talking drum here:

Alex Oma-Pius tells us about IROKO Theatre Company which he set up in 1996 and how he found a home in Newham in 1997. Alex speaks about the talking drum a Nigerian precolonial non-verbal communication instrument and the importance of understanding your heritage.