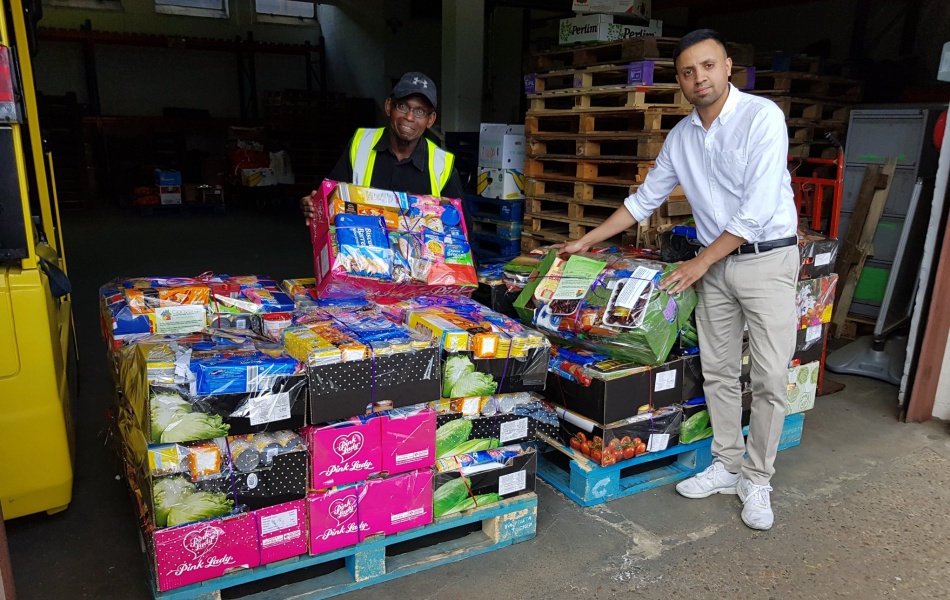 Eric Samuel MBE talks to us about Community Food Enterprise (CFE), a social enterprise food business which established in 2002 to alleviate food poverty. By 2008, CFE had developed a network of 22 food coops mainly in primary schools across Newham. However, from 2013 to date, CFE have been combating food poverty through another means – supplying and distributing food that is surplus to requirement to frontline charities and community organisations exclusively in east London.

Eric who grew up in St Albans, first came to Newham in 1998 to visit his mother in Newham General Hospital which is where his fight for ‘the right food’ for everyone in the community began. Eric was moved by the high level of food poverty he found in Newham and decided to stay and do something about it. He left his job in banking and has been living and working in Newham ever since.

Eric started off living in Cranberry Lane in Canning Town in 1998, which is where he set up his first food co-op, because it was particularly difficult for residents to access fruit and vegetables here, in what Eric describes as a ‘food desert’ – a place where there are no shops. He recalls that between Cranberry Lane and Eastlea Community School there was a wall and that parents used to send their kids out as young as 5 or 6 years old to climb over the wall to go to the nearest shops for them, otherwise it was a very long walk to get there.

Eric’s original idea was to develop a mobile store so he could move it to different places that needed him and drive away to restock food when necessary. Eric explains that at this time Newham was one of the worst places for food deserts in London, but that this has changed over the years and today there are supermarkets everywhere for people to easily get food. They also now stock food based on the cultural need of the area, which is something Eric originally wanted to carry out with his proposed mobile store.

Eric had been working unpaid and relying on savings from his banking days, but in 2002 UnLtd gave him a small grant and helped him put together a business plan. It was this year Eric was awarded UK Volunteer of the Year which was a real turning point. In 2003 West Ham and Plaistow New Deal for Communities (NDC) came in, which meant a major shift in power, from the top down to the bottom up, allowing communities to be in control. Eric said that Newham NDC was one of the best in the country and he won a major award for his work developing food coops in NDC’s catchment area.

In 2003, Eric persuaded Tate & Lyle to lease him an unused warehouse next to London City Airport rent free where CFE is based and where they have been fighting food poverty in east London from ever since. In 2006 Eric was honoured with an MBE for his contribution to the food industry as a social entrepreneur and in 2008 he had the rare privilege of meeting Her Majesty the Queen and had a fifteen minute, one to one discussion with her at the Tate and Lyle. 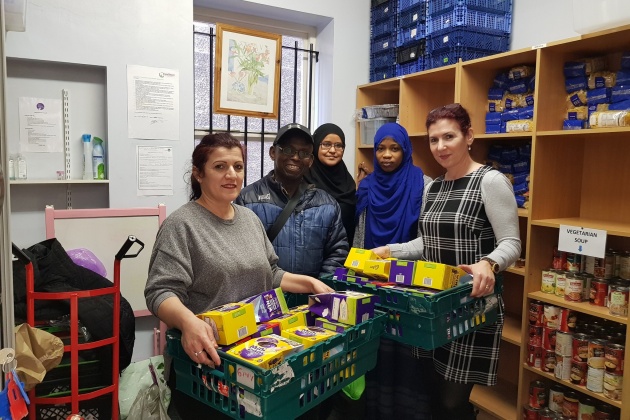 Eric with Volunteers at a project in Newham ©CFE 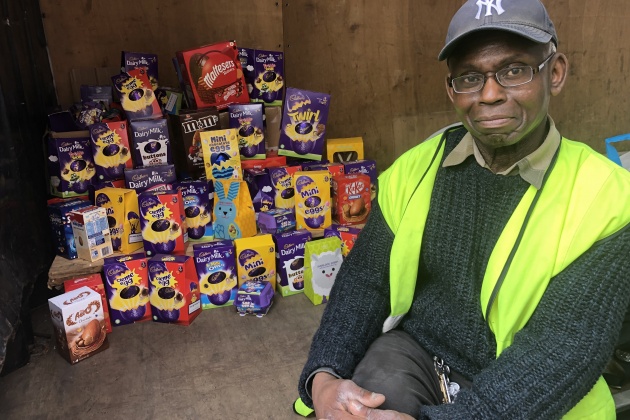 CFE’s mission when they first opened in 2002 was to make fruit and vegetables readily available and affordable. They did this through many different projects, one being school tuck shops where they would supply fruit to schools in order to get kids eating healthily. Afzal Hussain, who worked at CFE explained:

“Newham was one of the poorest boroughs in the country, and there was a high level of diabetes and high blood pressure, amongst young children. So we thought if we could give fruit to schools at least they get one or two of their five a day, because a lot of parents are on low income and fruit they see as a luxury. They feed them chicken and chips…because its cheap.”

Another project they run was food co-ops, where they supplied and delivered fruit and vegetables to the different organisations that run them from community settings. These organisations ordered food through CFE who then purchased it from a local wholesaler and place a very small margin on it just to cover the drivers costs, whilst keeping it cheaper then the supermarkets. CFE ensure they supply good quality food and aim to educate and encourage affordable healthy eating. “The goal is not to make a profit, it is a preventative measure.”

CFE also supply local organisations with fruits for their staff such as London City Airport, ExCel and East London Business Alliance. This generated valuable earned income, which helps support the large charitable side of the business – their food surplus project. 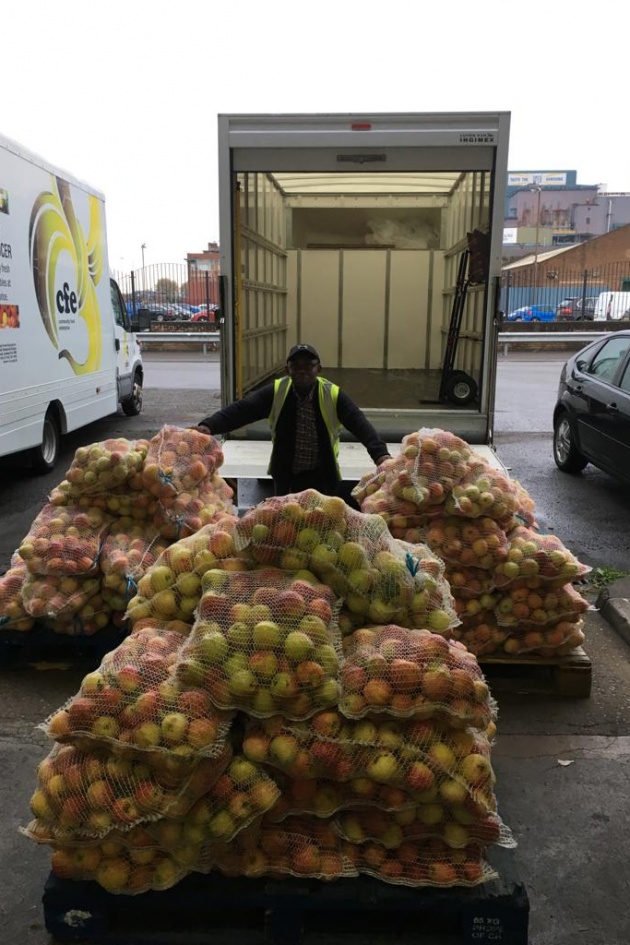 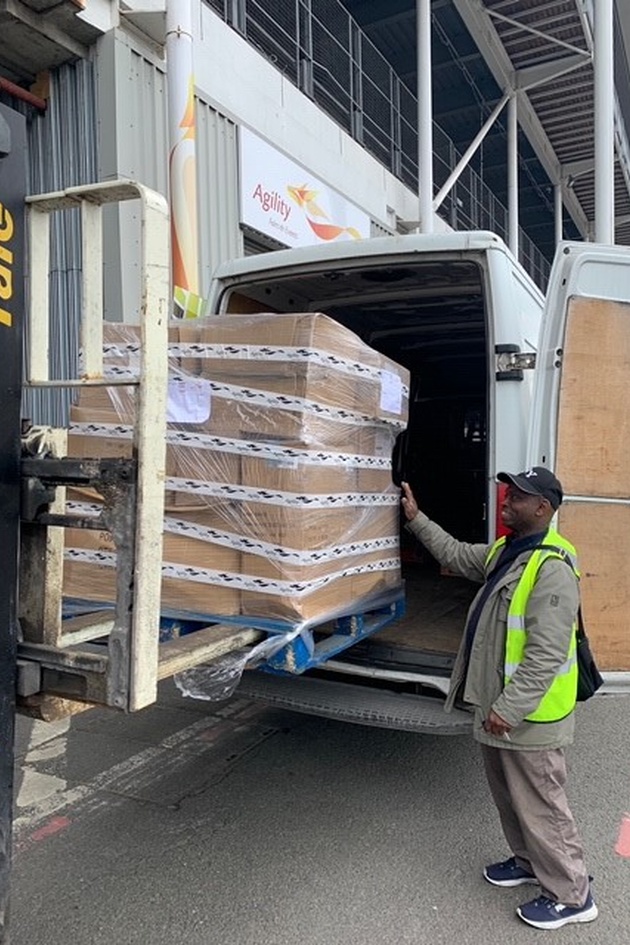 Deliveries to the community during Covid19 pandemic ©ExCeL

Food poverty in the community

CFE’s food surplus project started in 2013. Supermarkets began contacting them because they wanted to reduce their food waste and had a lot of food which, although it wasn’t bad, they could not sell because the package was damaged or someone had taken an item from a multi-pack etc, and so CFE started collecting and giving out this food waste to local charities such as homeless shelters. 70% of the food surplus they distribute is within Newham.

Luckily CFE had the infrastructure to run the project, with their large warehouse based at Tate & Lyle, their vehicles, man power and great local relationships. The project took off fast – they started off supplying 12 local charities in 2013, and today they support over 90 charitable organisations throughout East London. Afzal points out that this is not a good thing, that it just demonstrates how much the level of poverty has risen and the demand for food banks and surplus food:

“We work with front line organisations combating food poverty, so these would be refugee centres, homeless shelters, hostels, soup kitchens and breakfast and lunch clubs…They keep opening up and they need food to support their clients…so they’re asking us for food. The problem we’re having now is the demand for food is so high that we don’t have enough to supply them with what they exactly need.”

Afzal is passionate about the food surplus project, having grown up in East Ham all his life, he finds it emotional to see the level of poverty in the community and says that things are getting tougher, that food is at the bottom of people’s priority.

With the virus came further demand for food

Over the last few months since the Covid19 pandemic, CFE have seen a 30 – 40% increase in demand for their service and have been working tirelessly, seven days a week, 13 hour long days with a small team of two part time drivers, four volunteers, a part time warehouse supervisor and of course the CEO Eric.

They have been supporting seven Food Hubs (Forest gate, Manor park, Woodgrange, RDLAC, West Silvertown Foundation, Helping hands and Alternatives Trust) developed by Newham’s VCS partners, providing support for the most vulnerable in the community as well as providing support to Newham Council.

CFE has also been working together with several new and existing partnerships including DH Foundation where together at Easter they provided over 1,000 sandwiches to front-line workers and families and delivered them 100kg of produce. CFE have also been making weekly deliveries of groceries to The Courtney Hotel, Manor Park, a hostel for homeless people with 45 tenants.

They continue to have strong support from local partners such as ExCeL Hospitality who donated over 3,000 sandwiches to CFE that they then distributed to vulnerable members of the local community. London City Airport (LCY) and East London Business Alliance (ELBA) insisted on continuing with their Fruit Box scheme (which has been donated to a local charity), even though staff are on lockdown. CFE are also taking part in weekly webinars organised by the Mayor of Newham. 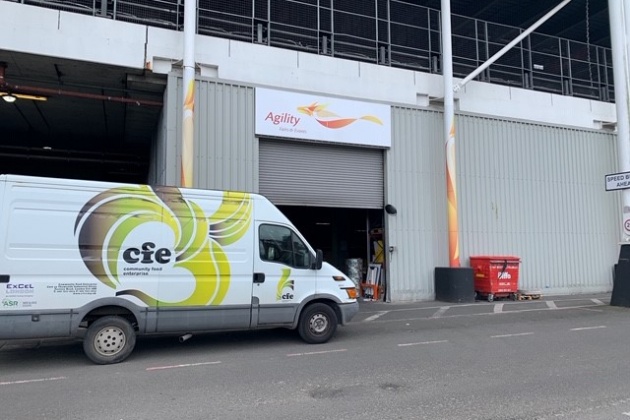 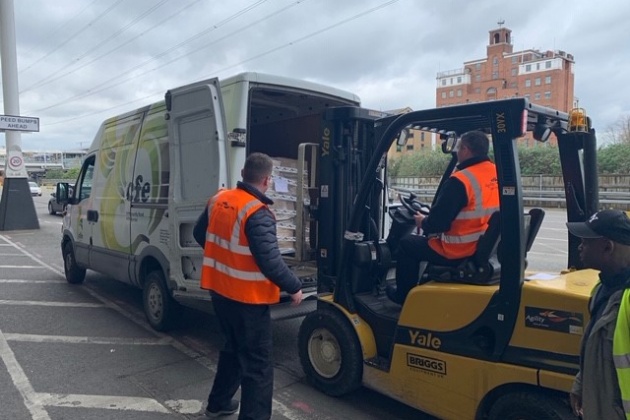 A collective of Partners

CFE have continued to gain support throughout the Covid19 pandemic with support from Tate & Lyle Sugars, ExCeL Hospitality, London City Airport, Copper Box Arena, and local branches of Lidl, Sainsbury’s and M&S, as well as extra support from: London Aquatics Centre, Compass Group UK, Lidl Hackney and members of the public who have donated food.

CFE have a lot of local support right on their doorstep from people that are passionate about what they do, including London City Airport since 2003 and ExCel Hospitality since 2007. LCY regularly donate confiscated goods to them and at the start of the pandemic, they gave them £6,200.00. ExCel Hospitality who run large events with a lot of food surplus – often ring them up and say “we have 300 sandwiches that go out of date tomorrow” and so CFE collect them straight away and re-distribute to shelters.

Eric is passionate about the local network of support CFE has and he couldn’t do it without them:

“We must never forget Tate & Lyle, what they’ve given us here is an infrastructure, vehicle and regular in-kind help…to enable us to support other local organisations…if it wasn’t for ExCel, the support we get from them or London City Airport, it is a collective with the community (CFE) leading. On behalf of the local beneficiaries thank you all.” 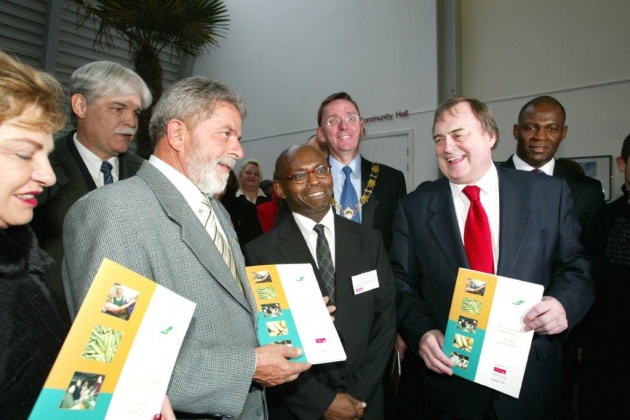 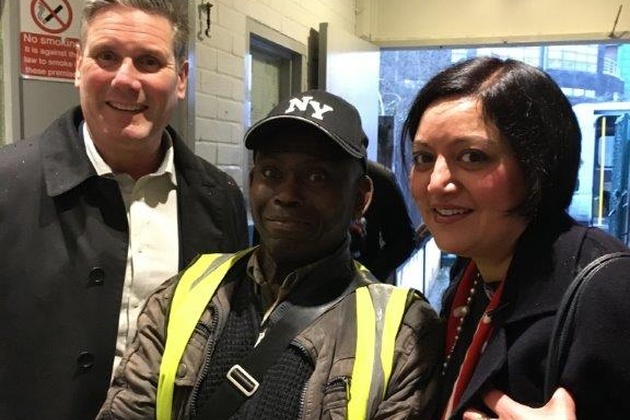 Eric strongly believes in empowering the community – CFE work to support other organisations and their initiatives. He finds the work emotional and says that “you’ve just got to help.” Eric has now lived in Newham for over 20 years, since 1998, first in Canning Town and in Forest Gate since 2010 where he has lived ever since.

“I’m an ordained minister…what I do everyday is my ministry, that’s the way I look at it… so this is what the Lord wants me to do, you can’t fight against it, well you can, but you’re gonna lose, hence why I’m still here.” 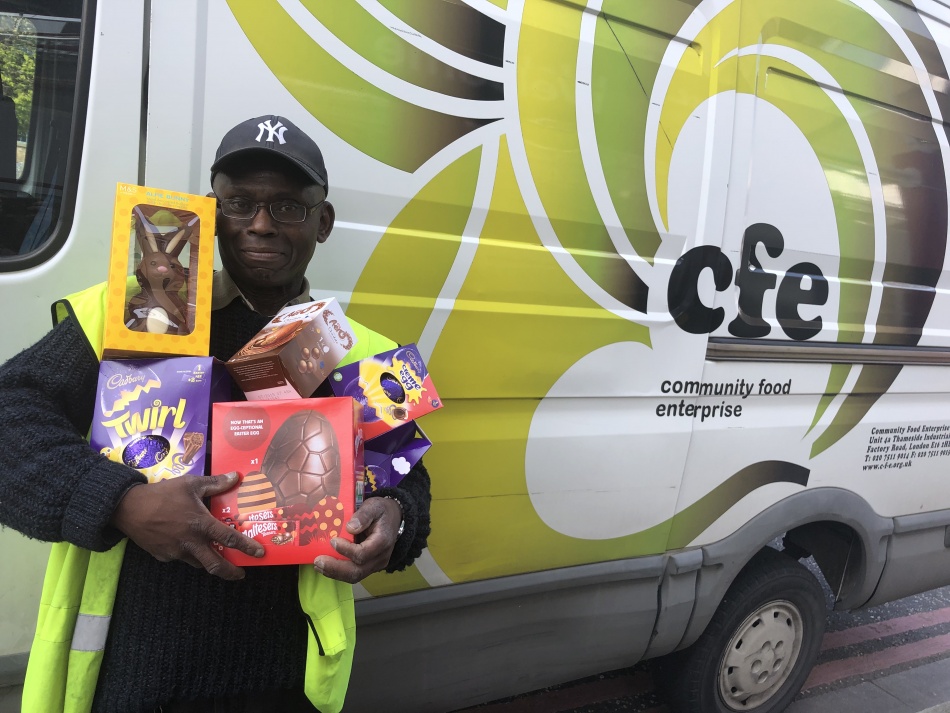 Eric with CFE van at the warehouse with Easter deliveries ©ExCeL

Eric Samuel MBE talks to us about Community Food Enterprise (CFE), a social enterprise food business which established in 2002 to alleviate food poverty. By 2008, CFE had developed a network of 22 food coops mainly in primary schools across Newham. However, from 2013 to date, CFE have been combating food poverty through another means- supplying and distributing food that is surplus to requirement to frontline charities and community organisations exclusively in east London.