Bushra Nasir – Becoming one of the first Muslim Headteachers

Bushra Nasir became one of the first Muslim Headteachers of a secondary school in the UK when she was appointed Headteacher at Plashet School in Newham. She worked at the school for 20 years before retiring in 2012.

“When I was appointed I was one of the first Muslim headteachers in the country. The job itself is tough anyway, but I was really driven to make it as successful as I could, particularly of this responsibility that I felt, being one of the first Muslim heads to not just do it well enough to be recognised as a good headteacher and a good school, but really so that I could show to people that you could be from any background and be a very positive role model, particularly for Newham students, and also people from the Muslim community.”

As a strong role model she also wanted to show that part of her identity was related to the culture and the background of Pakistan where she was born, so she wore her shalwar kameez, a traditional dress for Pakistani women to show her heritage. Plashet School and its community

One of the first things Bushra did as Headteacher, as the school didn’t have a good reputation in the community at that time, was visit all the local shopkeepers, introducing herself and giving them her card. She told them if there were any issues with any of the students to call her and not the police. These relationships Bushra built with the community were so important and when she retired, one of the shopkeepers bought her several gifts and told her with tears in his eyes, “today I’m saying goodbye to my sister, and when sisters leave home brothers always give presents to them”.

Plashet is an 11–16 comprehensive girls’ school with 90% of students from ethnic minority backgrounds. In 1993 when Bushra first became Headteacher about 50% of the students would not go on to post-16 education and only 28% of the students would get 5 good passes. By the time she left in 2012 , 98% of students were going on to work or to post-education to A-levels or B-Tec, and the GCSE results rose from 28% to 76% and was featured in a national report produced by Ofsted entitled ‘12 Outstanding Schools – excelling against the odds’.

“It was a great feeling that I was able to that, with nominal staff, really good relationships with the parents and the community, and the students themselves…changing the expectations and the outputs from that school. We were having students going on to medicine, law, all the different professions, we had students going to Oxford and Cambridge, so the whole horizon was really increased for our students in that time.” Plashet students giving their thanks to their brilliant Headteacher 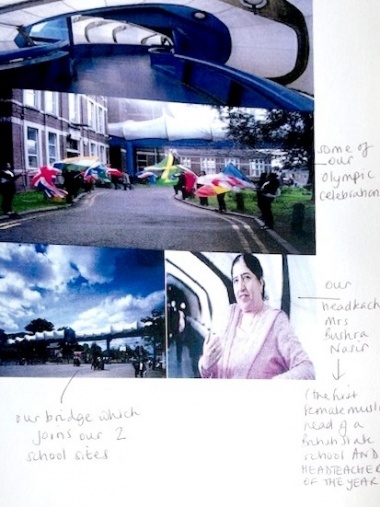 Bushra Nasir also chaired Secondary Heads’ meetings and mentored 15 Headteachers who were appointed in Newham. Bushra strongly believes that schools should not work in isolation and should be seen as part of the whole community and that knowledge should be shared. Plashet gained Leading Edge status in 2004. Bushra would encourage people to come to Plashet, see what they were doing and to take away ideas they could  implement in their own schools.

“Newham’s got a very very special place in my heart and it’s to do with building those relationships with students and parents, the community, and actually with other schools and other Headteachers.”

“We had children from different backgrounds, Hindu, Muslim, Sikh, Christian, and I actually wanted to head a school that was a state school and it was a multi-faith school…I think 60% of the children were Muslim, and when I was appointed I was a Muslim, it was very important for me that I was seen to be there for the whole, all the different communities…it was really looking to the needs of the children and the parents within that community, and ensuring everybody felt that their background, and their language and religion was valued.”

Plashet sought a determination to be able to offer different acts of worships and ran Sikh, Hindu, Muslim and Christian assemblies, lead by different faith leaders, as well as running multi-faith assemblies. The students were free to choose from any of the assemblies. The whole school would also come to together for different celebrations such as Eid, Diwali, or Christmas. It was a lot of organisation, but it was important to Bushra that all the communities were treated fairly which was picked up by Ofsted as very good practice. Their language curriculum also included Bengali, Urdu and French as well as extra opportunity classes in Gujurati and Punjabi. Bushra said that:

“the true meaning of education is broadening children’s horizons and experiences” and what better way to do this then through religious and cultural education. She says that a lot of ignorance comes from people not being taught and that if you understand, then you can begin to respect one another.

Breaking Stereotypes was born out of a development program for people within leaderships roles. The group wanted some sort of legacy for the program and so each went home and wrote an essay for this book discussing their journey and career. The book was aimed at young people to show them leading figures in Britain’s Black and Asian communities as well as inspire young people through recognition of achievements amongst ethnic minority groups. The group were from different walks of life including Headteachers, the prison service and Sir Herman Ouseley, who was later knighted for his work. Bushra remembers the story of one mother, who’s husband had recently died. She visited her home to offer support and the mother voiced her concerns about having ‘only’ three daughters. The girls all went to Plashet School and Bushra told her “your daughters are worth 10 sons” and the mother shook her hand and prayed she was right. Amazingly all three of those girls went on to become doctors.

“It’s about valuing the education of girls, and not saying I only have a daughter. You have a child, to help that child achieve to the best of their abilities. You’re not a second class citizen as a girl…their input will be phenomenal.”

The three sisters were featured in the Plashet School prospectus and became role models for other girls at the school. Bushra worked hard with the communities to help change these ideas around girls education and used herself as living proof.

“I said look, look at me, I’m married, I’ve got children, I’m a working mum, I go home, I cook, clean like everybody else, but also I’m a professional. Women can do lots of things given the opportunity and the right amount of support.”

Bushra explains how being a female Headteacher also helped you connect with other teachers. One teacher remarked how glad she was to have a female head, who is also a mum and who understands childcare and its responsibilities. Bushra recalls later sending that same teacher home who was sick and told her “you can only be an effective teacher and look after yourself and your children if you’re well, go home, it’s fine.” Bushra believes that by understanding these different experiences you can really change the culture and the ethos of the school.

In 2003 Bushra was awarded a CBE for her services to education which she describes as a ‘ phenomenal feeling’. This was in recognition both for her outstanding work at Plashet, but also for her volunteer mentoring and leaderships roles across the community, where she supported many individuals and groups, including the General Teaching Council and as president of the Muslim Teachers’ Association, supporting the development of Muslim teachers in London. In 2005 she won ‘Asian Professional Woman of the Year’ award and in 2006 she was awarded an Honorary Doctorate from the University of East London for her services to education. Going out on a high, Bushra was nationally recognised and awarded Head Teacher of the Year in 2012, the year she retired. In 2016 she was awarded the role of Deputy Lord Lieutenant (Greater London) by the Queen. 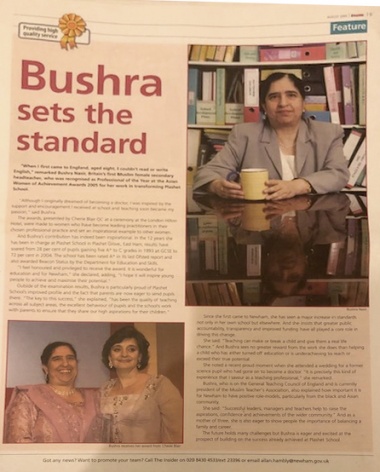 Being awarded ‘Asian Professional Woman of the Year’ 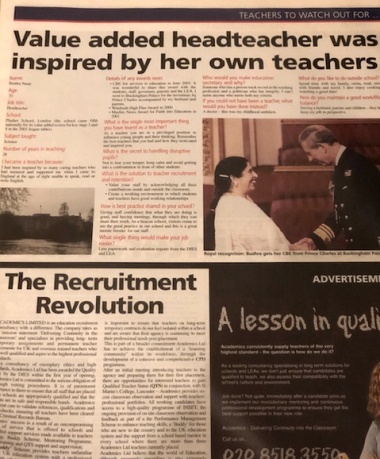 Being awarded a CBE for her services to Education 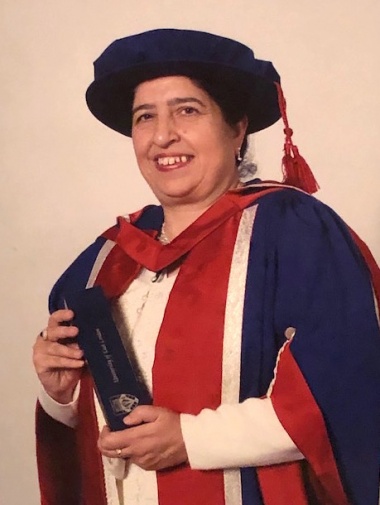 Honour Ph.D from UEL for services to Education

Since retirement in 2012, Bushra had originally planned to ‘be one of those people who put their feet up and go on lots of holidays,’ which she did for the first year, but was soon back working in the community when she volunteered as a Council Member for Queen Mary University.

She is now on the Education Advisory Panel for Mosaic, a Prince’s Trust charity where they connect business mentors to students in schools in order to raise their aspirations, particularly targeting Muslim students and is also a coach for the NCSL BME headteacher internship programme. She is currently also working two days a week or more as CEO of the Drapers’ Multi- Academy Trust where she is leading and supporting 5 schools on their journey to become Outstanding and has been awarded becoming a freeman of the Drapers’ Company. From this she was given what’s called the ‘Freedom of the City of London’ where her signature is now in a book dating back to 1300 ‘probably the most famous autograph book in the world’.

She is also Chair of the Education Committee of the Migration Project, a project close to Bushra’s heart and an important part of Britain’s heritage.

“It’s a very exciting project and it’s a way of  [showing] your own experiences as an immigrant… all these different journeys that people have, like my father and my mother, and the Windrush generation and the Irish migration. All those stories need to be out there so that we don’t forget and we don’t repeat, especially after Brexit and all that’s gone on, it’s even more important that we open up children’s minds about migration, what it actually means. And that Britain is actually a country of migrants.”

Bushra Nasir has been featured in 2 documentaries ‘Pioneers’ and ‘Slay in the fast lane’ which show positive Muslim female role models and their positive contribution to education and British society. Below you can watch the documentary ‘Pioneers’ about her lasting impression as one of the first Muslim, female Headteachers in the UK.

Bushra Nasir became one of the UK’s first female Muslim Headteachers of a state secondary school in 1993 when she became head of Plashet School for Girls in Newham.

Bushra talks about the importance of being an inclusive multi-cultural and multi-faith school and of strong role models. She co-authored the book Breaking Stereotypes, providing positive role models for ethnic minority young people.