Darning Newham, a project created by local textile artists Katie May Anderson and Memunatu Barrie, explores and celebrates how women have contributed to Newham. In alignment with the overarching theme of NHM 2021 being ‘Shops, Docks and Factories’ the project began with extensive research into women working in factories based in Newham over the period of 1890-1980. This research has been translated visually through collage, drawing and the creation of textiles, as the project seeks to make this heritage accessible and relevant to those living in modern Newham.

Factories have been an essential part of Newham for centuries, as a place of work for men and women. Whole communities were built around them, most notably in Silvertown where the Thames provided easy access to resources for the factories and houses were built for workers and their families around the factories. Photographs from factories such as Tate & Lyle give a fascinating insight into the role of women in Newham’s vibrant industry. Whilst factory work was, and remains, a key way in which women to contribute to Newham it is clear that Newham has changed dramatically during the period of 1890-1980. With modernisation, diversification, and political change over this period career prospects for women evolved and the way women contribute to society and economy has become more varied over the years.

This project is a collaboration between two textile artists with unique voices and so the methods of research and their final outcomes are distinct.

Katie May Anderson is a costume designer and dress researcher fascinated in the sartorial history of Newham. Her focus for this project was the period of 1890-1920, encompassing the end of the Victorian era and WW1. Katie’s design work started with scouring Newham Archive for any photographs of women working in local factories from 1890-1920. The discoveries were thrilling. The clothing worn by workers showed such a variety of style and fashion, hinting to the lost stories of these women.

Memunatu Barrie is a textile designer currently studying at Central Saint Martins with a specialism in Print. For this project she was drawn to researching the 1950 – 1980s as a period of dramatic cultural shifts in and around Newham. Both eras mark turning points for women’s rights in society and the workplace, as evidenced nearby at Dagenham’s Ford factory where in 1968 a strike by women sewing machinists triggered the 1970 Equal Pay Act. And by focusing on evidence found locally through her research, Memenatu has interpreted the changes in society as a whole. 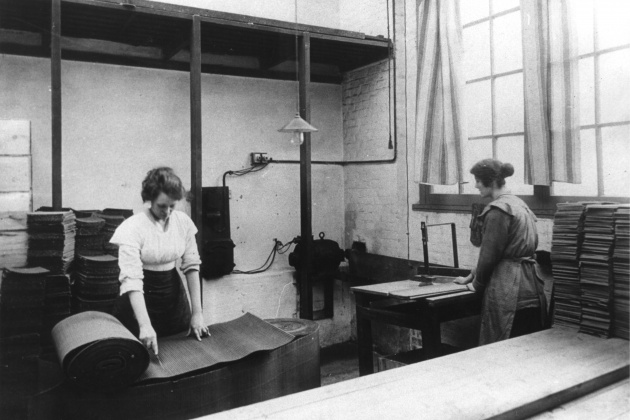 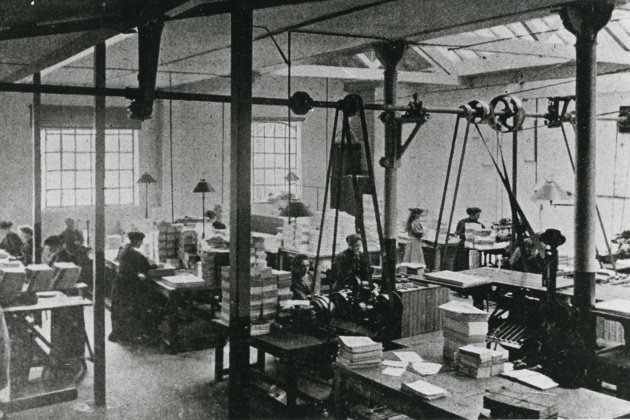 To discover more about the experience of these women’s lives the newspapers of the time can give further insight. Newspapers such as The Woman’s Dreadnought run by the East London Federation of Suffragettes shows how women in Newham’s factories had to endure poor wages, terrible conditions and little workers rights. One article titled ‘Factory Road!’ speaks of the conditions in Silvertown factories:

“The young girls said that all day, from 6 o’clock in the morning till 6 o’clock at night, they packed the sugar into paper bags (…) The girls’ money is 10s a week; the men’s money is 24s. (…) There is danger in doing the work, for the continual contact with the sugar causes sugar-poisoning, which breaks out once a year.”
-The Woman’s Dreadnought December 26th 1914 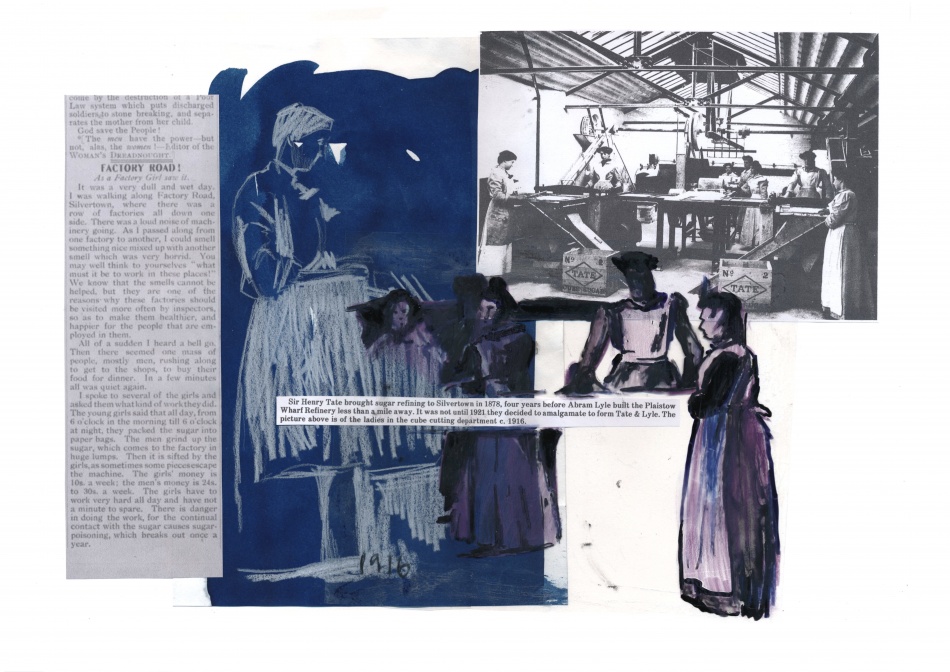 Katie chose to represent these loose threads of stories through drawing from photographs and combining with text from newspapers. She used a process called Cyanotype, which uses fabric dye that develops in the sun. This process of drawing, collage and printing meant she had to look carefully at the figures, observing details of the factory, the women and their clothing, all clues to the lives of these workers. 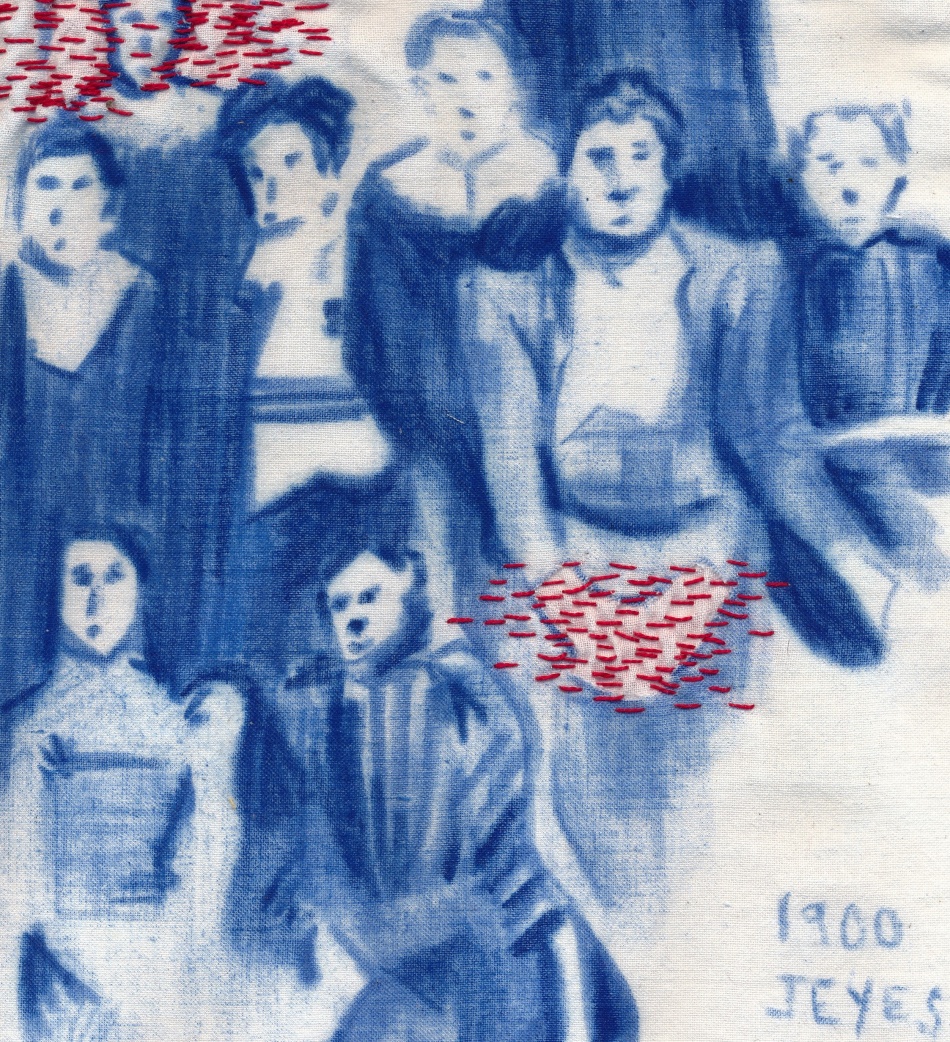 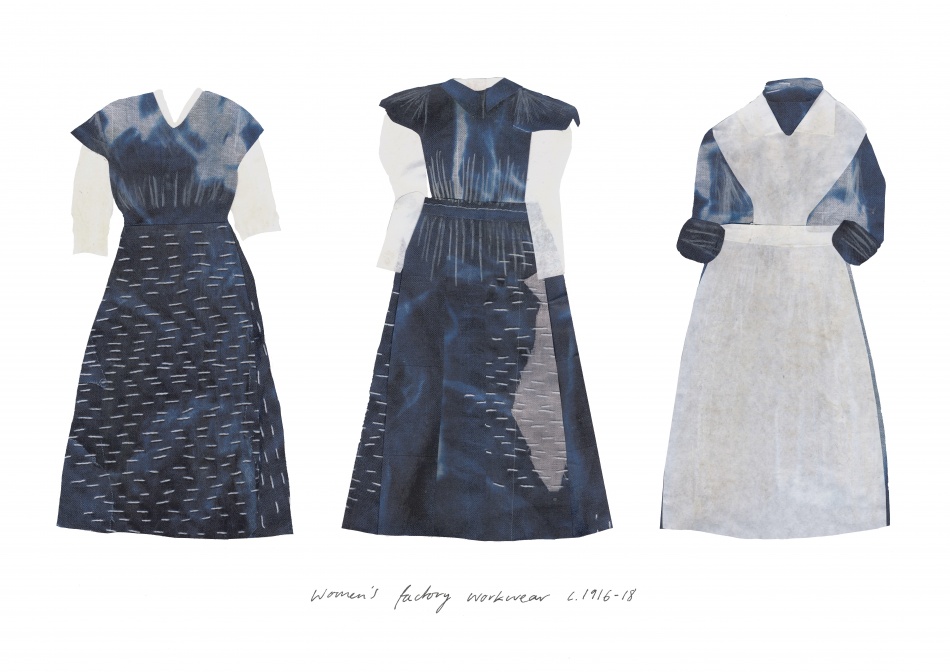 For Katie May Anderson her investigation of the more distant past led to the creation of a factory overall inspired by the photographs of women in factories from 1890-1920. The overall was made from a textile print created to represent these lost stories of female factory workers and emphasise the contribution they made.

Memunatu Barrie’s work culminated in the creation of a textile print representing the story of women in Newham from 1950-1980. In her iconic vibrant style she delves into the importance of individuals from varied cultural backgrounds in making community.  Both of these final outcomes will be presented in a film to be released by Darning Newham to mark the end of NHM May 2021. As a proud addition to both of these final pieces, Darning Newham will also present the work of the Darning Newham x NewVIc design competition winner in the film.