Women in shops and businesses

Today, Newham is full of independent shops –  just like 100 years ago when 20% of Newham businesses were owned or run by women, despite not having the right to vote yet. Some women inherited companies after their husbands died, others ran home-businesses to make extra cash. It was only from 1870 that married women could legally keep their wages from their husbands. 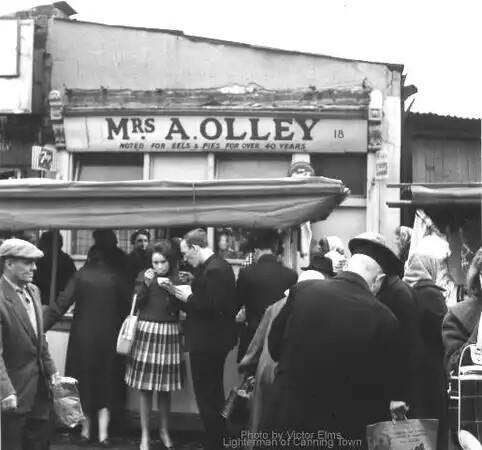 It was common to work six days a week, for 14-16 hours a day in the factories so you needed a warm, filling lunch to keep you going! Jane, aged 60, ran an Eel & Pie Shop on Rathbone Street in 1914. She was a widow and lived with her niece, Mary. This address remained as a pie shop after they left, becoming the famous Mrs Olley’s Pie and Mash. Pie and mash shops were very popular in London as they offered cheap and simple food, often run by Irish or Italian families. Pies were portable and small enough to take with you to work. Jellied eels were a delicacy that came off the boats from Holland. East Enders loved them so much, they would take a pleasure cruise boat on their day off, down the river, to a hotel and island in Twickenham named ‘Eel Pie Island’

Victorian life in Newham could be tough and keeping healthy was hard with the pollution and poisonous chemicals from the factories. Born in 1856, Sarah appears to have inherited a pill-making business from her husband who was listed as the business owner in 1911 but died in 1912. This business was likely to be a small production (and possibly dispensary) of medicines. Factories for medicines in London were only just starting so Sarah would produce medicines by hand, using a lot of scientific knowledge. After Edward Jenner published his work, babies were given free vaccinations from 1853, and by 1864 Louis Pasteur had proved that germs caused disease. Despite this, many of Sarah’s pills would have contained drugs and poisons that are illegal today and there were still no cures for most diseases. For example, if you got head lice you might be told to rub gasoline on your head or for toothache you might be given mercury which could poison you!

Working in the docks and factories was dirty business and your clothes would have needed to be scrubbed clean. Mary ran a laundry business from her home on Exning Road. She had nine children by 1914, and four of her daughters (aged 15-22) also worked with her. These small home-based

hand laundries were very popular in cities at this time. The work would have been hard physical labour. Many homes, particularly in working class areas like this, had no running water. So water first had to be carried from the pump at the end of the street. Then it was heated in a large copper boiler until hot enough to dissolve the grease on the clothes. They would be washed using lye soap and a big wooden stick known as a ‘dolly’ to pound them. Once rinsed twice, they’d be flattened using a mangle and hung up to dry – inside to avoid the soot and smog in the air!  After that, they’d be ironed using a heavy flat iron that had to be heated on the stove. This would all take several days so would be a full-time job and you’d have to be very strong! Mary’s husband was a coppersmith but with such a large family to support, her business must have also been incredibly important to the family.

Mary and Martha were partners running a high-end drapers business on Victoria Dock Road in 1911. At this time they were both described on the Census as “single women” but had been living together on the premises since at least 1901, when Mary was working as a draper’s assistant and Martha as a milliner. They lived together for 23 years but it’s unknown if they were romantic partners as well as business partners. It is only in this year’s census that an individual’s sexual orientation is being recorded.

Annie was born in 1868 but widowed with two sons by the age 33 in 1901. She ran an oil shop and warehouse which would have supplied oil for lamps and the textile factories in the area.

Mary was born in 1856 in Stratford and ran a general provision store on Hermit Road. This would have been the corner shop or general store of its day, when women typically shopped locally for food. Many of the goods would be weighed out and wrapped for each customer so shopping could take a long time but was also a social occasion and a chance for women to talk to each other. Mary was a widow and had five children, one of which was a dressmaker.

Josie was born in Canning Town in 1912 to Charles, a Dominican merchant navy quartermaster on the local docks, and Emily, who described herself as a “gypsy girl”. In the early 20th century, Canning Town – known as ‘Sailortown’ – had the largest black population in London. Crown Street became known locally as ‘Draughtboard Alley’ because both black and white people lived there. Although on the whole there were good relations between different ethnic groups, during and after the First World War tensions erupted into violence, and Josie recalled race riots during her childhood.  At 14 Josie was working for a Jewish tailor in Aldgate, but soon swapped making clothes for wearing them in show business! Belle Davis, a well-known African-American music hall star, chose Josie and her brother Charlie to train with the Eight Lancashire Lads, a popular clog and tap-dancing group with which Charlie Chaplin also started his career. Later they went to Paris, joining La Revue Negre – the show which had made Josephine Baker a star a few years earlier. In 1932 Josie joined the first established Black British dance troupe: Eight Black Streaks were “the world’s fastest dancers”. Josie toured with them, appearing at the London Palladium and in two films: Night Club Queen and Kentucky Minstrels, in 1934. She’s even credited with launching the jitterbug dance in London! As a film actress she organised a strike for the Black extras over late payment, and confronted the film’s producer, saying:

Either you pay us what we are owed, or you can kiss my Black ass

Martha, born in 1856, was married to Andrew a Sawdust Contractor, with seven children. When Andrew died, Martha took over the business on Huntingdon Street, becoming a Sawdust and Firewood Merchant, and employing one of her sons in the family business. They were still in operation with Martha as the head of the business aged 58 in 1914. Before fridges, sawdust would be used to keep ice frozen in ice houses or as fuel for factory furnaces.

Phoebe was born in 1856 in Sussex. She owned a draper’s business on Freemasons Road and was head of her household with her two nieces working as her assistants. Drapers would buy fabric from merchants or import it from industrial towns like Manchester and Paisley and then drape selected fabrics across the doorway for customers to see and feel. Ready-to-wear clothes weren’t readily available, so seamstresses and tailors would buy the fabric here.