Darning Newham were given the opportunity by Newham Archive and Local Studies to view clothing from Newham’s factories worn by female workers in the early 20th century. Newham Collections Service provided access to a munitions factory overall c.1917 and two factory caps c.1910-30. These artefacts are a tangible piece of Borough’s history and help reveal the lost stories of Newham women.

Newham based textile artist Katie May Anderson investigated these dress objects to discover their place in the Borough’s heritage. By photographing and drawing this surviving factory clothing Darning Newham present Newham’s past as deeply relevant and tactile to modern residents.
Firstly the two factory caps had little information attached to them. One called ‘Factory Cap, Pink 1910-1930’ and the other called ‘White Factory Protection Cap’ in the Newham Museum Service records. Drawing them brought all of their beautiful details into focus. 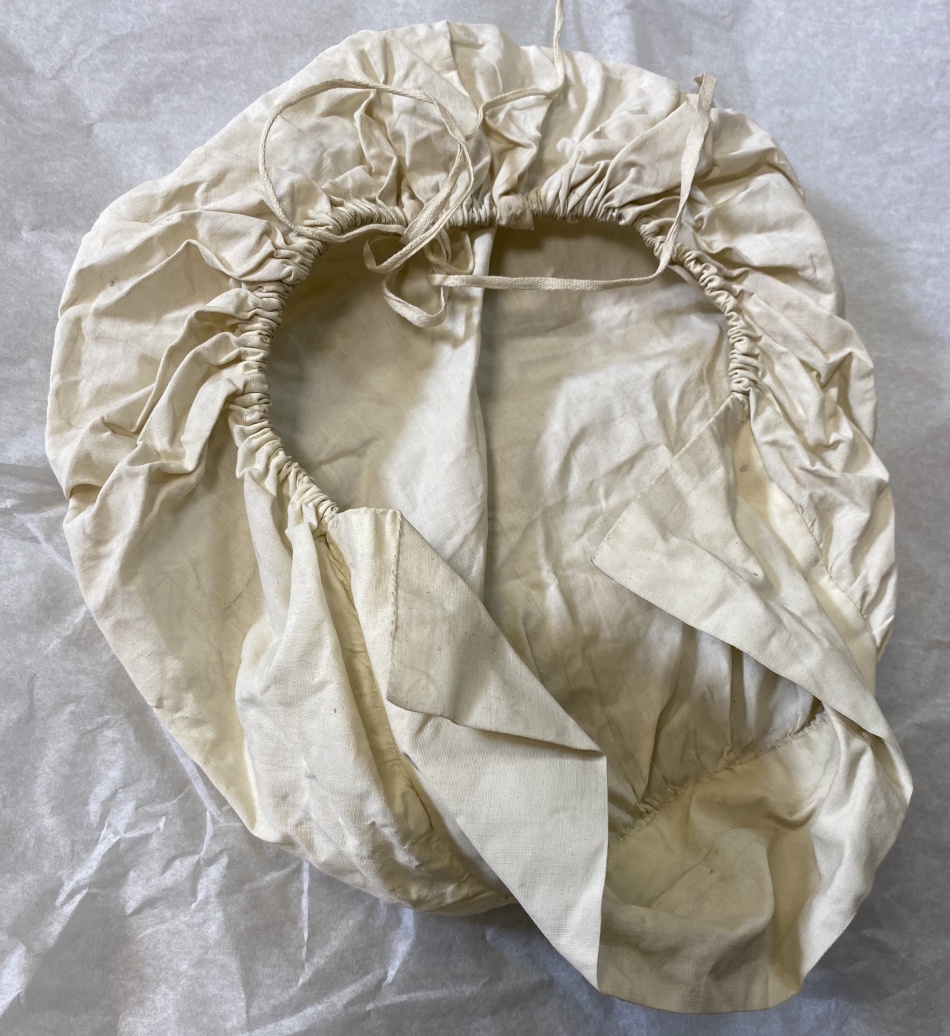 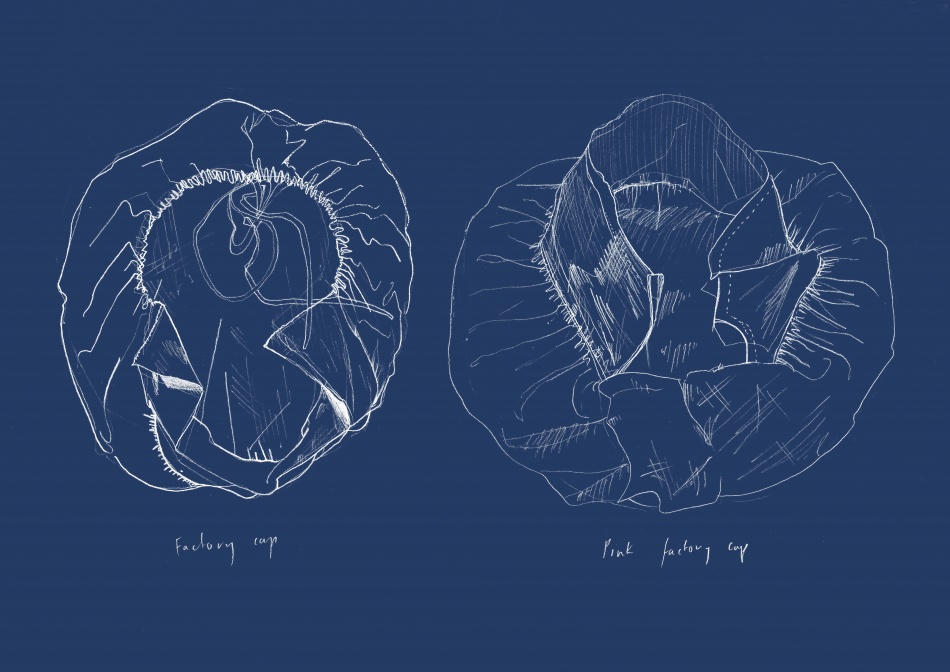 Drawing of the factory caps by Katie May Anderson 2021

However questions remain about the context in which these caps were used. Photographs from Newham factories reveal how they might have been worn, this image shows caps like these with the rim of the cap folded over at the front. Although we cannot know the whole story of these factory caps, this little discovery was an exciting clue to their history. They also confirm that this style of cap was one worn by women, further evidence of how women were involved in Newham factories during this period. 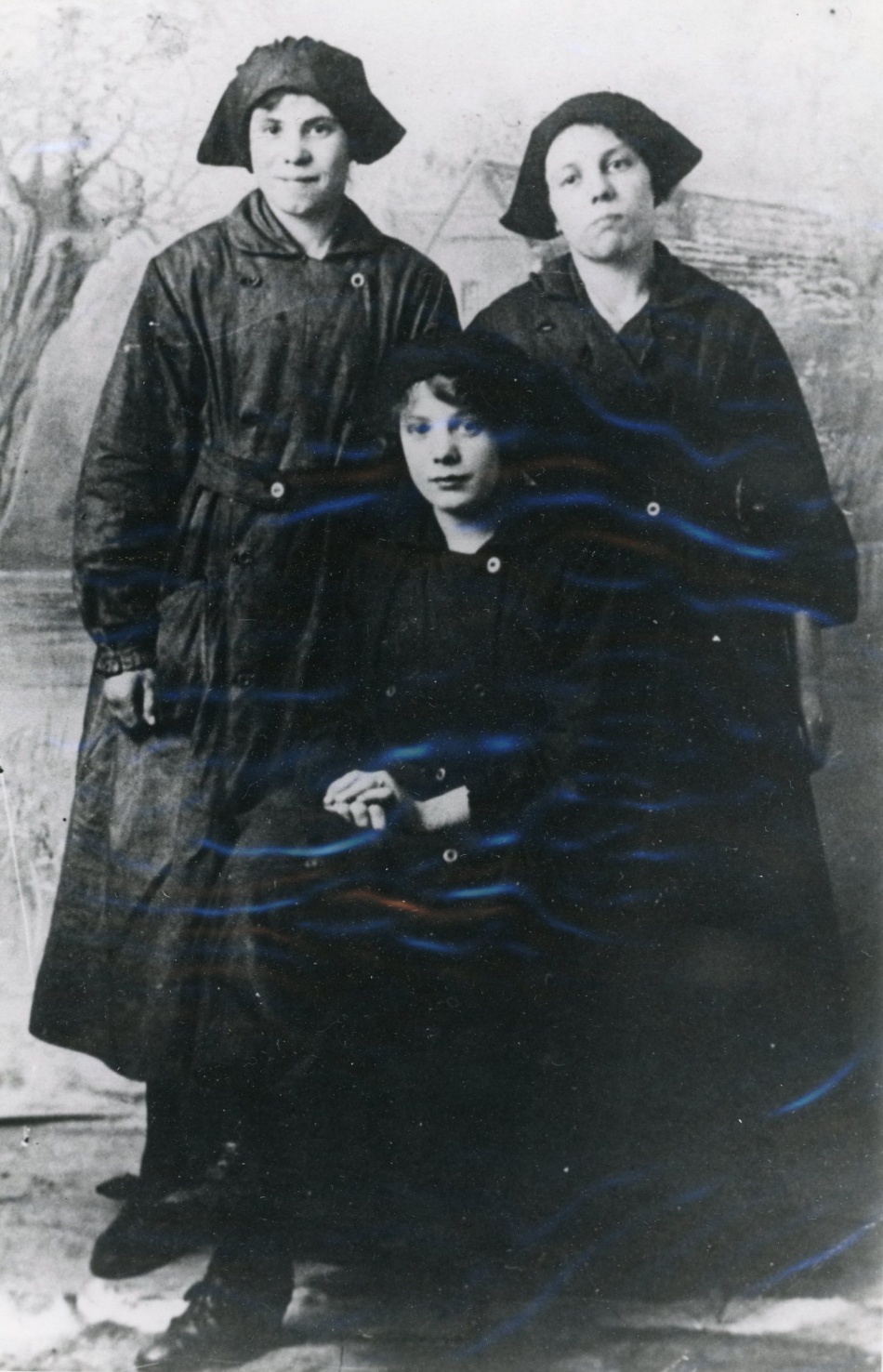 In comparison to the factory caps, much more is known about the factory overall also in Newham Archive. It is labelled as ‘An overall worn by a factory worker during the Brunner Mond explosion’. Whilst it is not specified as a women’s overall the size of the garment and the collar decoration suggests that it was worn by a female factory worker. 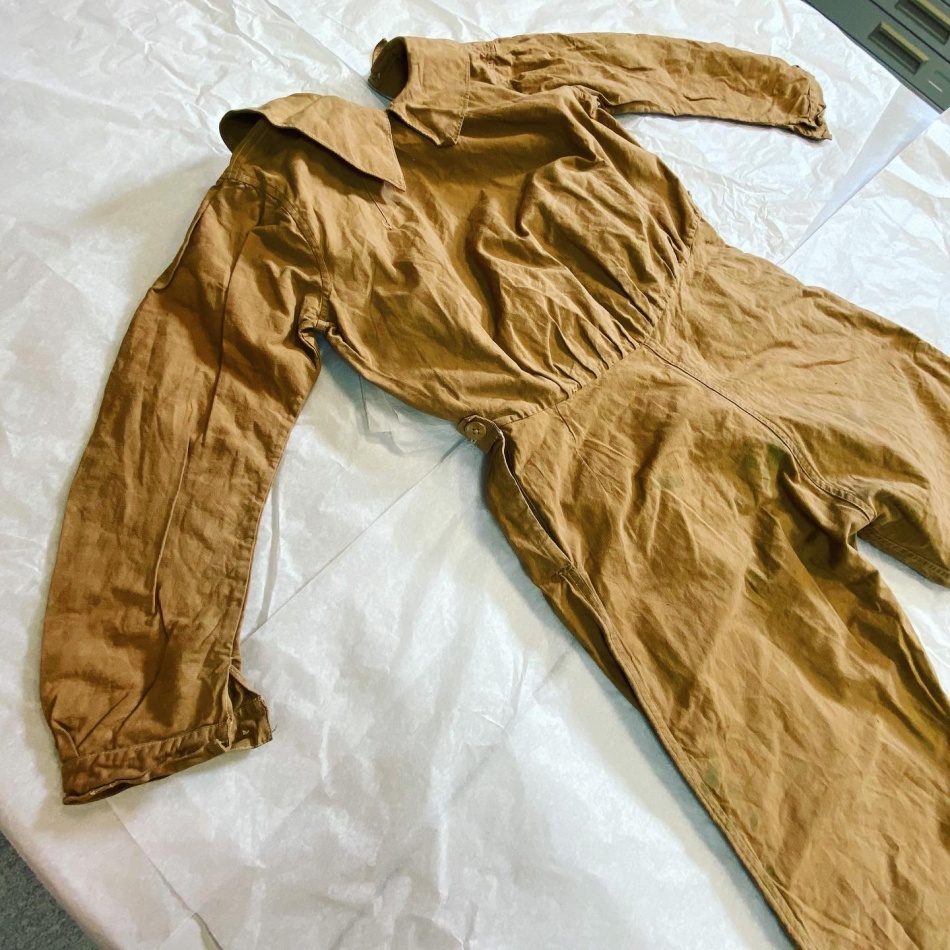 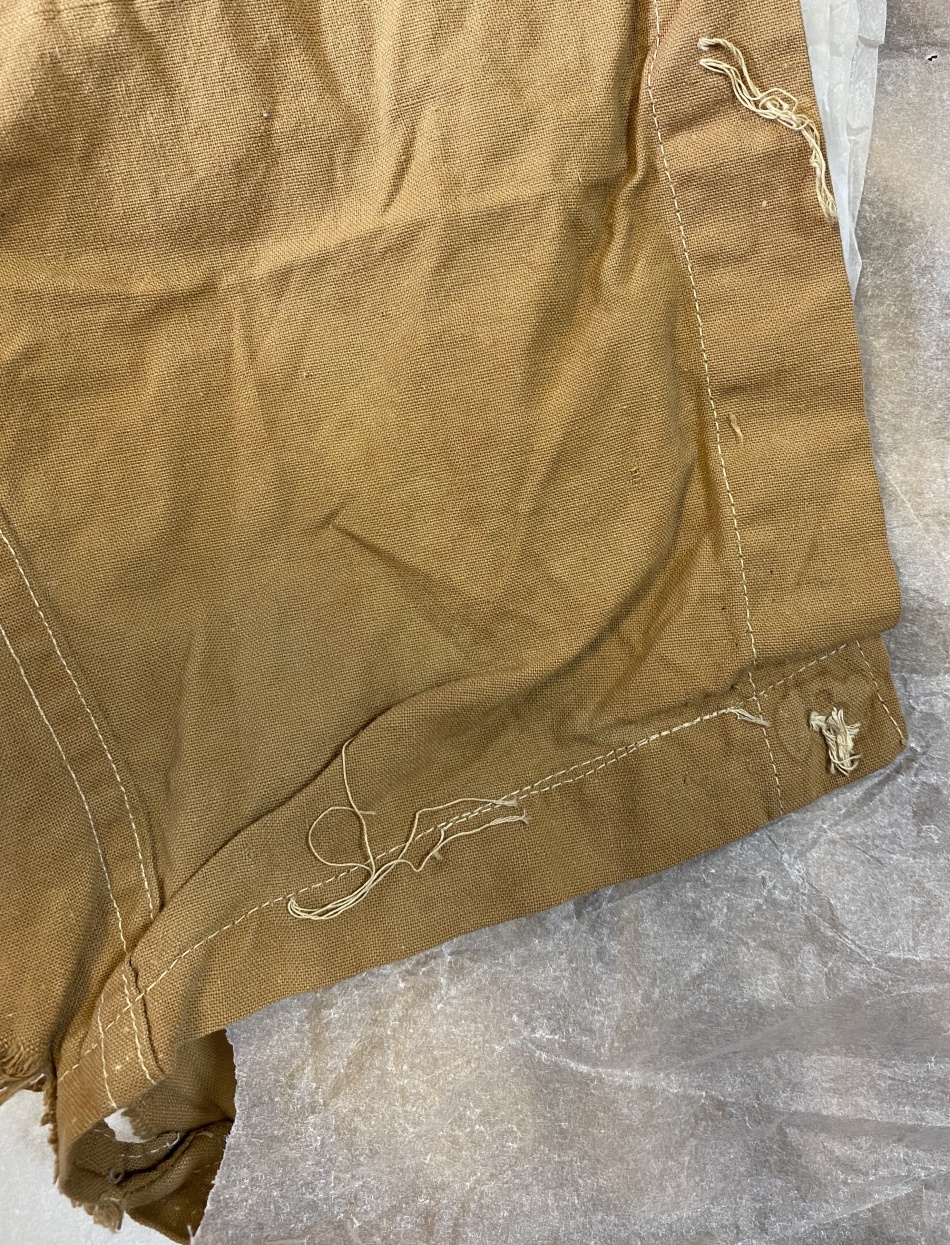 While the overalls are a little damaged; with lost buttons, splotches of discolouration and a small hole, it is in amazing condition considering the dramatic circumstances it survived. The disaster of the Brunner Mond explosion occurred in Silvertown in 1917. It happened during World War One when factories were being pushed to their limits to produce resources for the war effort. Brunner Mond was originally a chemical factory established in 1893 in Crescent Wharf in West Silvertown. It was converted into a munitions factory in 1915 where it was used to purify TNT to create explosive shells for the war. This was an extremely dangerous production process that was usually done in factories away from populated areas. The factory was not only 200 yards from dense rows of workers’ houses but also right next to many other factories that contained highly combustible materials like oil, wood and varnish. The Ministry of Munitions felt it was ‘worth the risk’.

On Friday 19th January 1917 a fire in the melt-pot room of Brunner Mond ignited 50 tonnes of  TNT causing an explosion heard across London. As many as 73 people were killed and 400 were  injured. One of the 73 victims of the explosion was Catherine Elizabeth Hodge (also called Lizzie  Lawerence) who was a worker at Brunner Mond and aged only 16. Beyond the initial death toll the  explosion also destroyed over 900 houses and damaged up to 70,000, leaving thousands of  families homeless. A newspaper reporting on the event spoke to those who narrowly escaped the  destruction:

A red-cheeked factory girl was telling of her escape.

We saw the fire and went out to look at it.  Someone said, ‘You’d better run; it’ll burst soon!

This factory overall not only symbolises the terrifying explosion in Silvertown but reflects the harsh  reality of those women working in munition factories. Employers in war industries saw women as  their main resource, not only for replacing men who joined the armed services, but also to expand  production. The patriotic element of war production caused abuse of employees in working hours,  wages and conditions. Suffragette newspaper The Woman’s Dreadnought reports on the  conditions in munitions factories:

“According to the statement of the Ministry of Munitions there are over a hundred thousand  women who (…) are not yet granted a living wage.” “In certain munitions factories of London, girls  are employed from eight in the morning till nine at night,” “women not merely run the risk of being  blown up like the workers in East London last week, but the certainty of being poisoned by lyddite  or T.N.T.”

By the end of the war, over 700,000 – and possibly up to one million – women had become  munition factory workers. This era marked the beginning of an expansion of opportunities for  women but they came with deeply unequal workers rights that had to be fought for continuously.  Discovering these clothing artefacts in Newham Archive opened a window into Newham of the  past, bringing to light the great contribution of women in Newham’s factories. 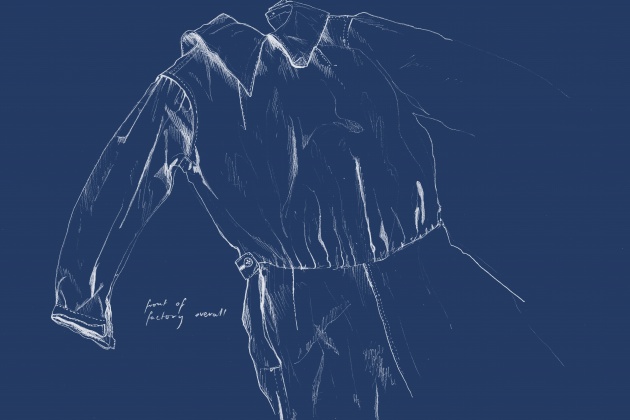 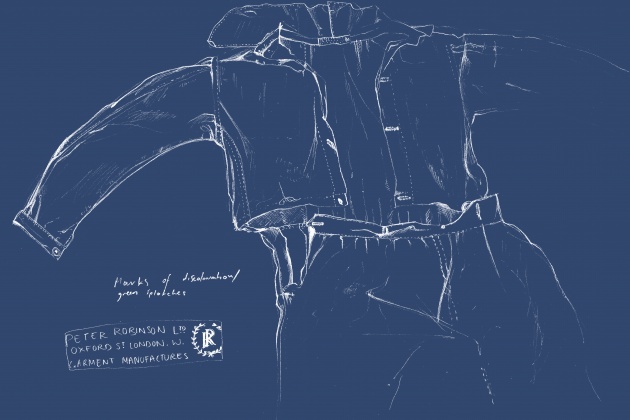