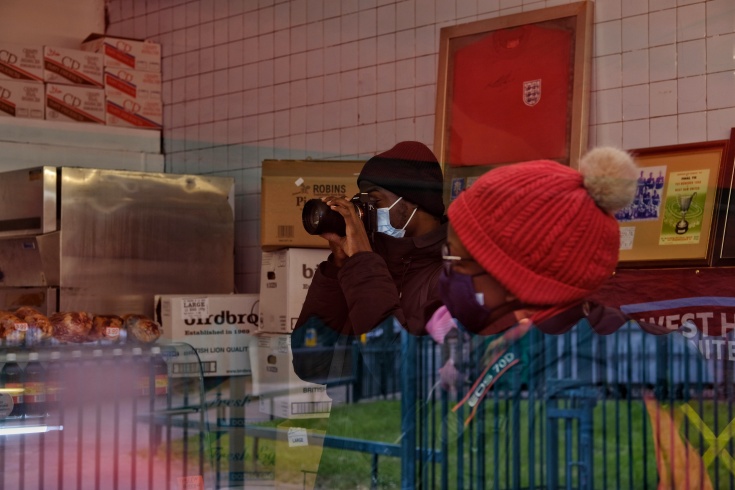 Greg on a photo shot in G&R butchers. Photo by Keith Martin

Dad, I think this is something you might be interested in? (A WhatsApp message from my daughter)

The PDF attached to the message was from Newham Heritage Month – Community Volunteer Photographers, looking for participants. Having dabbled a bit with photography over the years – at one point I turned my under stairs cupboard into a dark room! The part about ‘photographers’ immediately grabbed my attention. Reading through, I thought, why not?! I emailed my phone number to the address given, contact was established, a brief phone interview with the NHM2021 team and I was officially signed up.

Oh! Let me introduce myself, my name is Greg Caballero. Originally from Trinidad, I have been a resident of Newham for over 40 years and proud of that privilege. I was excited to receive an email and then make contact a few days later from Jan Cullen:

‘So nice to talk to you this afternoon and to have you onboard with us for Newham Heritage Month 2021. As mentioned the month will take place in May and will explore the theme of Shops, Docks and Factories,’

I was looking forward to it already, camera charged and raring to go However, due to the pandemic and with social distancing and lockdown in place, the only option initially was Zoom meetings. So come Friday evening, I logged on and here were nine of us Newham residents all getting acquainted thanks to technology saving the day. For our initial photo shoot assignment, given to us by professional photographer Keith Martin, it was to be an individual effort. Our goal was to take three photos: something you use daily, a portrait, and a picture from your window. It was great thinking about what to focus on and after mulling over a few options I took my shots. Mission accomplished! A view from my window. Photo by Greg Caballero

Then, on to the next assignment which was to go out and photograph buildings. Things were getting really interesting now! It is funny how you walk or drive past so many wonderful buildings in Newham without really noticing them, their design and how old they really are, like the Abbey, the pub on the corner of Barking Road and New Barn Street. Built in 1742 and originally named ‘The Crown’, it has a sign over the entrance (which is no longer used) that reads PRIVATE BAR & JUGS. Digging into its history, I found out that was the entrance for the customers who preferred to bring their own jugs to be filled and taken away rather than drinking in the pub.

I loved drilling further down into their past and the part they played in Newham’s history, making so many amazing discoveries.

Finally, the easing of restrictions meant the group can now meet up (cheers and applause please) which we did on Saturday 10 April at 10am in Stratford. It was so nice to meet people from the group in person for the first time and what a lovely, cheerful bunch they were. We set off down West Ham Lane, stopping and snapping shops and buildings with Keith, ever the true professional, always ready to guide us to take the perfect shot – he kind of reminded me of a great school teacher I once had. It was a fantastic morning and for me the star of the show that day definitely has to be the owner of the G&R Butchers shop off Plaistow High Street. A big fan of West Ham United football club – pictures of the team adorn his shop everywhere – he came and stood outside allowing us to photograph him, like a star on the red carpet! Brilliant!! (And I think he enjoyed it as much as we did.) The morning ended with us standing outside a café taking in some hot drinks and for me, a well-deserved Mocha. Our next meet-up on Saturday 24 April was at the docks, Dionne Lynch was at the helm, deservedly so as she lived close by, pointing out really interesting things of note. Another fantastic morning taking pictures of just about everything and anything: at this point my camera was now begging for mercy, with the cable cars above, swimmers in the water, and some kind of mini water skiing going on; I had so many things to snap away at! Finally, the session ended with another sit down for hot drinks before we stopped in at the Archives at Stratford Library. This place is Newham’s DNA with the borough’s entire past life held here: pictures, old maps…if it’s not here, then it just didn’t exist! Such interesting finds, such as a logbook where workers who did something wrong had their name and what they did entered into it (such as the fella who was caught drunk on the job and fined a few pence and suspended for two days without pay). Maybe that’s where the saying, ‘you are in the bad books’ comes from?! Anyway, there was so much to learn and it was the perfect end to another great day out with the group.

I look back at that first WhatsApp message with news of the group and I am so glad I followed it up. Taking part in this project for Newham Heritage Month has been a fantastic journey, giving me the chance to do something I love, meet some wonderful people and, above all, getting to know a lot more about Newham, both now and past. Many thanks to all the volunteers, Keith, Jan and Newham Heritage Month! 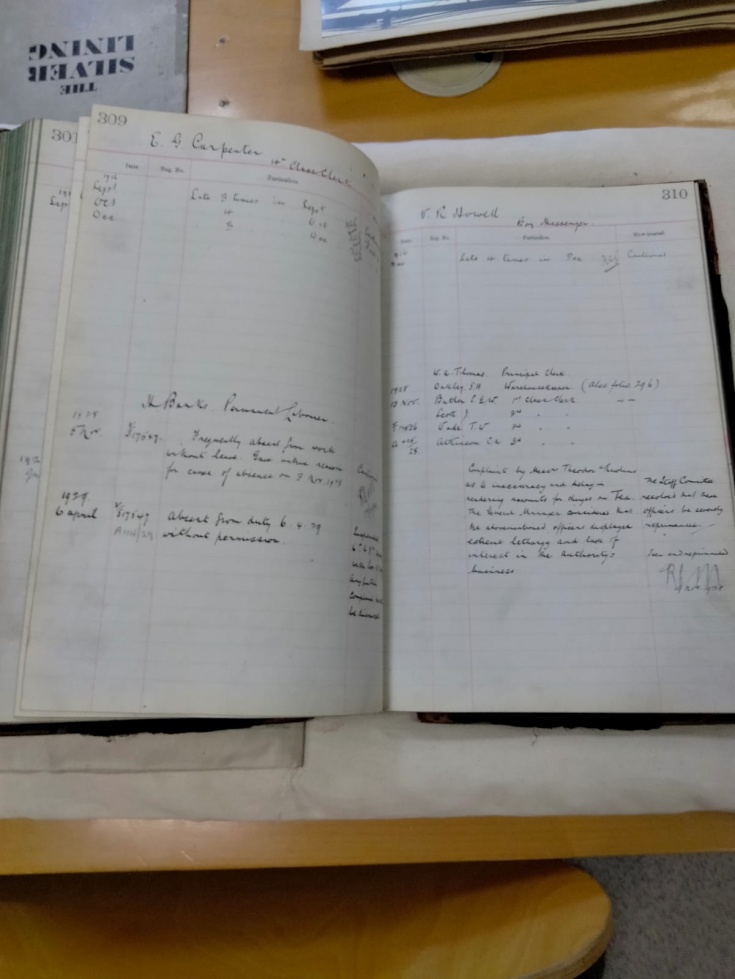